Raleigh: Nick and The Babes to Headline Lincoln Theater Show 8/24/12 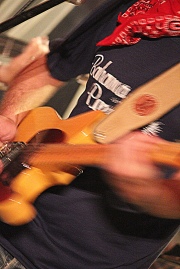 Turn it up maaaaaan!

Well if that isn’t enough reason to go catch headliners Nick and The Babes at The Lincoln Theater in Raleigh, NC on August 24th, I don’t know what is.

After a hiatus from touring, band members Nick (guitar, vocals), Graham (drums, vocals), Rob (keys, mandolin, banjo), and Dail (bass) are excited to get back on stage at one of Raleigh’s most popular music venues.  Though scattered between Raleigh, Greenville, and New Bern, the band has been working diligently on practicing, recording and producing 8 new songs for an upcoming EP–expected to be available on iTunes in the next month. 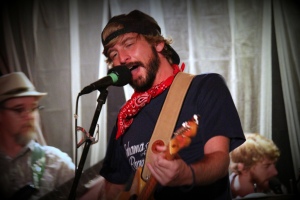 I recently caught up with guitarist/singer/songwriter Nick Bailey to find out more about the band’s upcoming Lincoln Theater show and new music on the horizon.

“This is our first time headlining at The Lincoln Theater and we are very excited to share the stage with other great musicians like Jason Adamo, Brent Jordan & J.T. Poe, and Young Cardinals,” said Bailey.

With that coveted headliner spot comes a well-earned benefit–freedom from the ticking hands of the on-stage clock that often terrorizes opening acts and limits what would otherwise be epic jam sessions.

“It will be nice to just go with it and not be so worried about the time limit that comes with being an opener.  Guitar and drum solos can go a little bit longer, and we wont be constantly checking the clock.  We are really looking forward to that,” explained Bailey.

For their first show in quite a while, fans can expect a mix of old and new tunes from NATB, with newer material departing a bit from their patented acoustic Americana sound.

“[We’ve written] some darker songs that are a little bit more driven by the electric guitar.  I have been greatly influenced by bands like Pearl Jam, and I think that is reflected in our newer songs.  The songs on our new EP will definitely have more of a rock feel to them, and a more produced sound that will offer our fans some good variety,” he said.

One of the songs that will appear on the EP, called Girl I Know, is currently being featured in Our State Magazine’s first-ever singer/songwriter competition.  Girl I Know, as well as NATB original Morning Light, will be judged alongside songs from other local musicians by music industry professionals.  Bailey admits that he’s not holding his breath to take first prize in the competition, but recognizes the value of taking advantage of a great opportunity to expose a wider audience to the band’s music.  While the original version of Girl I Know maintains NATB’s traditional sound, the EP version will have a louder jam-band sound that fits their current musical direction.

For Bailey, the majority of 2012 has been spent writing music for TCL’s new reality TV show about conjoined twins, called Abby and Brittany.  With his “day job” project now complete, he can shift his attention and energy to the things he loves the most in life–getting back on stage with his band mates and ripping those legendary, face-melting electric guitar solos.

For only $8 you too can go and get your face melted by NATB on Friday, August 24th at The Lincoln Theater.  Get your TICKETS before they are gone! Openers at 7:30PM, NATB at 10:30PM. 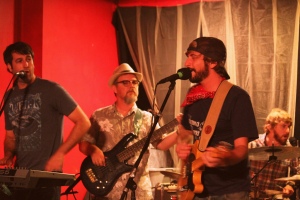