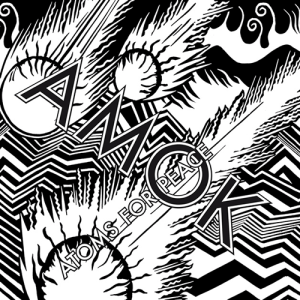 In 1953, President Dwight D. Eisenhower delivered a speech to the United Nations General Assembly titled “Atoms for Peace” — a well calculated attempt to ease a fearful nation and world in the wake of a hasty nuclear arms race between the United States and Soviet Union. It wasn’t until sixty years later, that the speech’s title would reemerge, this time as the band name for Radiohead lead singer Thom Yorke’s side project.  Yorke adopted Ike’s speech title just before dropping the band’s debut album, “Amok,” a nine-track electronic bomb of synthesized and acoustic rhythms enriched by Yorke’s signature voice.

A few years prior to the recording of “Amok,” Yorke called upon Red Hot Chili Peppers’ bassist Flea, longtime Radiohead producer Nigel Godrich, drummer Joey Waronker of Beck and R.E.M fame and Brazilian percussionist Mauro Refosco to help rework music from his solo album, “The Eraser,” for live performances. What started as a transient collaboration of powerhouse musicians for the stage, transitioned formally into Atoms for Peace and the idea for “Amok” was born. While “Amok” could very well be considered Yorke’s follow-up to “The Eraser,” its energy is built on a melding of live percussion elements with generated beats that Yorke admittedly could not have accomplished independently.

“Amok” is a fitting album title in that as a whole it possesses a constant state of musical frenzy, shifting back and forth between organic and electronic to the point of organized chaos. The intricate layering of beats comes off quite effortlessly when paired with Yorke’s etheric vocals. Each track provides listeners with a unique cochlear experience that should be fully appreciated through headphones, so as not to miss a beat or lyric. Every element deserves the listener’s attention.

Individually, each track offers a nuance of sound, while together tracks maintain a cohesive flow throughout the album. For this reason, it is difficult to pick out the obvious frontrunners. The album’s opener, “Before Your Very Eyes…,” feels like a journey of hasty locomotive beats fit for The Darjeeling Limited, complete with distant sounds from the bar car of ice cubes being dropped into empty glasses. “Default” and “Dropped” offer a synthesized video arcade vibe with different tempos. “Ingenue’s” unrelenting rhythmic raindrop beat balances the virginal fantasy world that Yorke’s lyrics create, while “Useless” enlists a hardened industrial approach with tight drumming, likely influenced by Afrobeat legend Fela Kuti.

“Stuck Together Pieces” is anchored by Flea’s bass lines, while “Judge, Jury And Executioner” is all about Yorke’s ghostly background vocals and claps. “Reverse Running” is the one track on the album that relies least on the laptop and more on the live performances by the band’s members, which is a nice departure for the ears. The album ends with the title track, “Amok,” which keeps the beats consistent and uncomplicated, while progressively layering vocals over each other.

Throughout “Amok,” lyrics billow weightlessly over explosive beats, often getting lost in translation — perhaps deliberately. However, with Yorke being one of the most over analyzed musicians of the past few decades, it seems unlikely that he would carelessly string lyrics together devoid of thought. Themes of love, despair, mortality and self-deprecation emerge at selective moments, but overall the lyrics are not the driving force of this album — the crown belongs to the beats. Whether a listener wants to analyze every intricacy or just let the music take over, this album provides an escape from reality — a place to get lost for 45 minutes — and for many music lovers that is all that is needed.