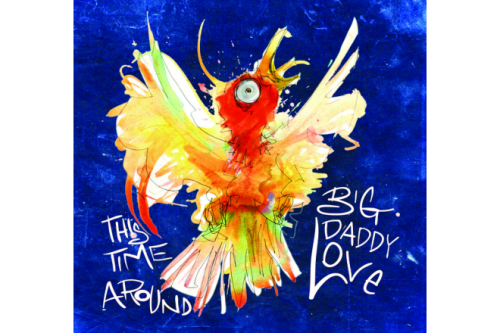 For Winston-Salem-based Appalachian-rock band Big Daddy Love, making an album that represents a new line-up and fresh talent meant trekking up to the magical land of Woodstock, N.Y.—a place so rich with musical history that inspiration runs in the streams and lives in the mountains.

With Moss and Recchio as lyrical masterminds, “This Time Around” finds its niche quickly and settles in without pause. There is no time to waste, as the majority of tracks keep a high-energy pace matched by the intertwining of guitar and banjo that lend a special ferocity and fire to the album as a whole.

The album opens with “Nashville Flood,” an instant rocker with brassy horns and gospel undertones. The track swells into an ominous prediction of what happens when false dreams come crashing down. “The Colour” follows with a blues guitar intro that blends seamlessly into bluegrass banjo rolls and feels like an outlaw road trip across county lines.

“Eunice and the Bear” is a stomp clapper jam that shows the band’s storytelling side. It chronicles the life of a rambling man, his wife Eunice, and a stuffed bear head on their cabin’s wall. Lyrics paint a vivid picture of just how big a bear story can grow after years of marriage. It is a sweet and fun track with a backwoods twist.

One of the album’s longer tracks, “Kerosene,” feels like a blend of John Mellencamp and The Black Crows, low and slow blues peppered with the electric energy of guitar and a soulful church choir. Big Daddy Love steps up the backyard bonfire country vibe on “Last Night’s Dress,” a small-town boy meets girl tune that reminds listeners of the beauty and freedom of young, carefree love.

“Smoke Under the Water” is as bluegrass jam band as it gets, melding down and dirty guitar riffs with rolling, bouncy banjo and smack-you-in-the-face bass lines. There is no way to sit still during this instrumental track. “Home No More” brings in an eerie reggae-rock vibe mixed with laid back blues lyrics about being down on luck, while “Star Spangled Blues” taps into southern rock patriotism with steam engine momentum and an electric guitar solo that whines with American, feverish pride.

“Susan” downshifts to a heartfelt ballad filled with regret and unfulfilled dreams of a long lost love and untapped potential. Just when you think the pity party is going to dig deeper, “Every Other Day” slowly picks up the pieces and pace, grows a backbone and flashes its teeth. There is a revengeful quality in the supporting guitar arrangement and cool and calm, yet strong vocals.

“Silver and Pearls” is the album’s best representation of bluegrass mountain music, highlighting the speed, precision, and punch that a banjo brings to a song. The title track, “This Time Around,” brings the album to a close with beautiful acoustic instrumentation and reflective lyrics. Stripping the song down to bare bones reveals the true talent of a band that can step away from busy and thematic arrangements to successfully deliver a simple message to the listener with humility and thoughtfulness.

The melding of rock and blues throughout the album gives it a throwback quality that speaks to the band’s elevated musicianship, while still feeling fresh and current. The banjo plays an important and consistent role across the tracks, but never seems to shine in quite the same glory as the electric guitar. Though the Appalachian roots are present, the grit of good ol’ southern rock and belly fire of the blues reign supreme on “This Time Around.”

To check out “This Time Around” and keep up with Big Daddy Love’s non-stop tour schedule, visit the band’s website at bigdaddylove.com.