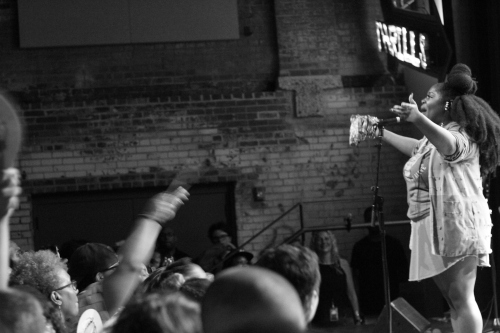 I went in blind.  Meaning, the only exposure I had to the New Orleans-based band, Tank and the Bangas, prior to their SOLD OUT show at Haw River Ballroom in Saxapahaw, NC, was a 20-minute snapshot through the lens of NPR’s Tiny Desk Concert Series.  I was the fish, and I was hooked.

When I found out that a few days after this discovery, Tarriona “Tank” Ball and her Bangas would descend on that utopia along the banks of the Haw River, I made the conscious decision to stay above ground, avoiding the YouTube rabbit holes.  I wanted my virgin live experience to be pure.  I wanted every moment to feel new, which is in itself a lofty desire, but one I was willing to put out into the universe. I was not disappointed.

Tank – They must call her Tank because of the presence she brings when she enters the room–formidable and strong on the outside with intricate, delicate machinery on the inside.  A mix of fury and finesse, Tank shared her tornado of expressions without pause.  Within seconds on stage, the joy in her face and the swing in her hips told the crowd that it was time to have fun, and that while the carnival of emotions might take us from elation to exhaustion, all of it should be embraced. 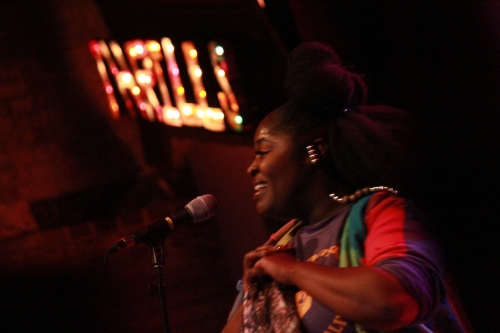 With close to three decades of life experience under her belt, Tank has stories to tell.  That night, below the glow of the word THRILLS, Tank seamlessly wove these stories together, calling upon childhood fearlessness to emerge again despite the confines of adult responsibilities.  Her authenticity and old-soul wisdom empowered and energized the crowd effortlessly.

The juxtaposition of her strength and fragility was simultaneously conflicting and comforting.  This push-pull generational struggle was embodied by the multiple personalities tucked in the pockets of her limitless vocal range.  From her wide-eyed, bright-pitched, girlish pops and squeals to her salt-of-the-earth, gritty, seasoned tones, Tank covered the spectrum of emotions easily in the first five minutes she was on stage.

In life, people like to categorize things–place them in tidy, little boxes.  We are all guilty to some degree of this practice.  As I watched and listened, it became harder and harder to put Tank in a box.  She exudes originality, so much so that making direct comparisons to other female artists is futile.  Capturing her style in one or two words is like playing an endless game of whack-a-mole.  Just when you think you can nail her down, she’s gone. 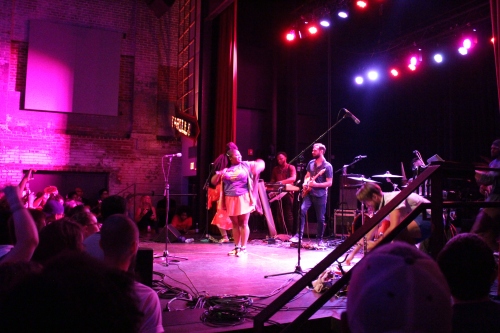 Worth noting is Ms. Joseph’s contribution to the whole live experience.  While Jelly is labeled a background singer, and has been called Tank’s “fly girl,” my impression after seeing her live is that those labels don’t quite hit the mark.  Sure, she helps keep the crowd hype, but she also shines in her own light–out from Tank’s shadow.  The tightness of her vocals with Tank’s felt genetic, like sisters who spent their lives singing together.  The love and respect between these two was palpable.  To be obvious, she’s the jelly to Tank’s peanut butter–you don’t have one without the other.

The Show – While I expected similar feelings to those I felt watching that Tiny Desk Concert, what I could have never predicted was the myriad of places the band would take me throughout the set.  As a kid growing up with the rise of hip-hop in the 80s and 90s, I was transported back to my days of parachute pants and one-strap overalls.  It felt as if I was witnessing a modern-day resurrection of Native Tongues, but with a new twist–spoken word and smooth, soulful jazz peppered with hip-hop, rock, punk, and Broadway theatrics.  Welcome to Bangaville.

Spoken word erupted in the 1950s in the US, and has evolved over decades of war, oppression and  social injustice, as a means to bring words to life—give them depth and dimension that is often denied in printed poetry.  This art, achieved through an intense and syncopated delivery that demands attention, is the centerpiece of Tank’s brilliance.  And while she certainly can and has commanded a crowd as a solo artist, the richness offered by The Bangas, expands the ripple effect far beyond the confines of a one-woman show.

At one point in the show, Tank asked, “Did you think I went through all that I went through to stay the same?”  Profound statements like this were sprinkled throughout the set, making it almost impossible not to stop and reflect.  In between the fun, silly moments, a message of hope and the importance of self-acceptance embraced the audience without warning or apology.

The set itself was solid, including fan-favorites Walmart, Boxes and Squares, Oh Heart, and their newest hit Smoke Netflix Chill.  The band took us all back in time with a rambunctious cover of Nirvana’s 1991 hit Smells Like Teen Spirit and a slowed-down soulful rendition of Outkast’s 2003 jam Roses.

Following the set, and a brief moment off-stage, Tank and the Bangas reemerged to encore with Rollercoaster–a perfect way to end what was in itself an evening of ups, downs, twists, turns, and as my three-year old son would describe it, “tummy tickles.”  As the house lights came up, I looked back on the sold out crowd– a sea of faces lit up like the 4th of July, ready to get back in line and take another ride. 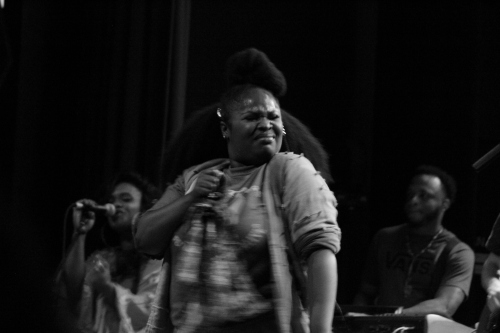 To learn more about Tank and the Bangas visit: http://www.tankandthebangas.com/