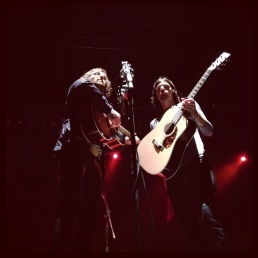 We’ve changed a lot, and no one here can stop that train before it gets to where it’s going

These lyrics resonate with me each time I listen to The Avett Brothers’ new album, The Carpenter. While there are certainly collections of lyrical lessons nestled in all twelve of the album’s new songs, these particular lyrics from I Never Knew You serve as a shot of reality to fans, both old and new. The band, made up of brothers Scott and Seth Avett, bassist Bob Crawford, and touring members cellist Joseph Kwon and drummer Jacob Edwards, is sending a pretty clear message that they are a forward-moving, well-oiled, meticulously crafted machine that shows no sign of pumping the breaks anytime soon–not even for their fans who are waiting at the “I Want More Banjo Station” screaming, “Hey, what about us!?” Didn’t Ill With Want teach you all anything? 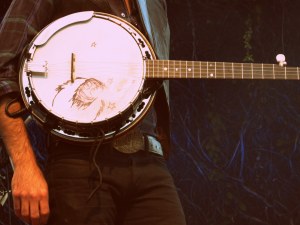 Sure, The Carpenter has a more produced sound (um, it’s a studio album), and yes it may teeter on the cusp of mainstream pop music with an Americana twist, but so what!? Music is made to move the listener, to evoke emotion and thought, and that is what The Avett Brothers do best–banjo or no banjo. If the album moves you to tears, laughter, love, goosebumps, or overwhelming joy, well then stay on board and enjoy the ride. If you start to experience motion sickness, please feel free to get off at the next stop and find a different destination, because this Avett train is movin’ on.

For me, listening to The Carpenter is kind of like taking that train ride through the countryside–a thought-provoking experience of varying landscapes for the senses and soul. The brothers Avett, a charming pair of musical vagabonds who never seem quite comfortable sitting still, take listeners on a journey down the path of self-discovery. While they have left deep, muddy bootprints in all corners of the US, their mode of exploration goes well beyond planes, trains, and automobiles, so much so that they spent nearly three years in the trenches mucking through their own very private experiences–both joyous and sobering–in order to put this album together. 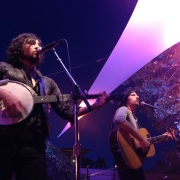 The Carpenter certainly maintains a common theme we have seen from the Avetts over the past decade–man searching for meaning through the passing seasons. The opening track, Once and Future Carpenter, stays true to this theme as it portrays the travels of “a poet young and hungry” on the eternal path for purpose. Imagery of spinning slot machines accompanied by lyrics like “sometimes I hit/sometimes it robs me blind” remind listeners that while life’s just one big crap shoot, we have to take risks and make the best of the hand we are dealt.

Although Live and Die is the only banjo-heavy song on the album, I predict some disappointment from fans who covet that gritty punk-bluegrass Avett sound of past albums and live shows. Instead, Live and Die delivers a much more radio-friendly pop sound, and showcases a delicate and happy side of the banjo. This catchy tune is like a big ol’ mason jar full of NC honey, dripping with the sweetness that is Mr. Seth Avett. It doesn’t get any sweeter than this folks. It is a fun and joyful song that I will undoubtedly be singing in and around the house for weeks to come. 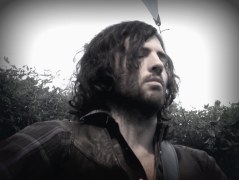 Winter in my Heart takes a somber turn as the band openly shares their woes with depression. A poignant admission of falling victim to the black veil of depression, this song will hit home for fans who have experienced their own feelings of hopelessness and despair. The brightest light in this dark song is Kwon’s hauntingly beautiful performance on the cello, which is further elevated by the eery cries of the musical saw (side note: whoever came up with the idea to use the musical saw on an album titled The Carpenter deserves his own Grammy. Seriously, that is genius!). Overall, Kwon adds breathtaking dimension to this already multifaceted cast of characters, and continues to solidify the authenticity and uniqueness of The Avett Brothers.

On a rejuvenated February Seven Avett country charm resurfaces with crisp guitar picking and clean vocals. This song feels like throwback Avett–a simple song with strong and honest lyrics, much like the songs of the musical legends that paved the way for them. Through My Prayers speaks to the heavy regret and sorrow that comes with missing the chance to tell someone you care. Here, Seth shares the story of a painful lesson learned and implores others to show the love in their hearts before it’s too late–no message could be more chilling and appropriate as this on the 11th anniversary of 9-11.

The Avetts take a brief departure from their 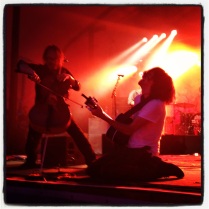 traditional acoustic sound, and give a slight nod to their Nemo and Oh What a Nightmare roots by bringing out the electric guitar for a few face-melting riffs on songs like Geraldine and Paul Newman vs. The Demons. Paul Newman vs. The Demons offers a new twist on an old theme–not learning from past mistakes (think Distraction #74)–but this time with a very different sound that tends to distract from the album’s cadence. On a positive note, the song does evoke quite vivid Labyrinth-esque images of Seth falling down a dark rabbit hole while being grabbed at by his demons on the way down, only to find Paul Newman there to save him in the end. Seriously, in my mind this has already translated into the most amazing Crackerfarm video. Nevertheless, it will be interesting and exciting to see how this song matures and holds up on stage. Additionally, Pretty Girl from Michigan gets plugged in and ends up as one of the best songs on the album. This song has been a longstanding fan-favorite, so it is nice to see such a smooth transition from the road to the studio.

The infamous banjo returns on Down With The Shine, alongside a horns section that brings in some dirty Bourbon Street undertones. Although this song has been floating around for a few years, it made its first “national” debut on NPR’s Tiny Desk Concerts and has been evolving ever since. More recently the live version has turned into something of a big top waltz with Scott acting as the dramatic ring leader. While this album version is masterfully layered with rich instrumentation, it unfortunately feels bogged down and sluggish in comparison to the live version. Herein lies the magic that is the ever-changing nature of Avett Brothers songs, and also why I don’t put too much stock into the initial “feel” of the album versions of their songs. Inevitably, the live variations of these songs will continue to move audiences and strengthen their already loyal fan base. Fear not weary, doubtful fans, it will be alright.

Deep beneath the mountains of depression, loss, and turbulence that drives the album, emerges a true gem that immediately beams with light. A Father’s First Spring shines brightly in all its glory as Scott shares the overwhelming feelings that accompanied the birth of his first child, Eleanor. To say that this song will move you to tears is an understatement (think Murder in the City, Part 2). Though simple, the lyrics “I was a child before/the day that I met Eleanor” reveal a complex evolution of character. Scott’s mastery of song and story allows him to speak on life’s purest love–that of a parent for his child–and evoke the deepest of emotions, even in listeners who have yet to experience parenthood. This track is a pure nugget of gold–a special gift from a proud daddy to his daughter, all in the name of posterity (of course).

The album closes with Life, which highlights the fragility of our time here on Earth. Themes of faith and love are intricately woven through the song in true Avett fashion. The beauty of this song lies in its simple message to live with intention and keep those you love close, for “we’re not of this world for long”. As the end of the musical journey approaches, Life leaves me with a feeling of hope, promise, and empowerment. 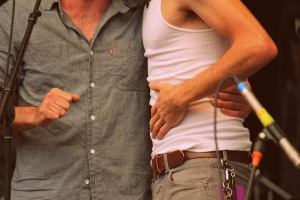 Overall, The Carpenter proves to be a cohesive collection of songs that gives fans a glimpse into the maturing hearts and minds of men who strive to find deeper meaning and purpose in life. The album succeeds in balancing themes of life and death–good and evil–and opens the door to further discovery and evolution. What it may lack in raw energy, it certainly makes up for with raw emotion, like a wound left open for all the world to see. This album bears the souls of a band of brothers who have been up against some very serious life changing events, yet in their transparency fans are afforded the opportunity to listen, relate, heal, and push on to a new day.

The Carpenter, which was officially released today, is available on iTunes and exclusively at Target with bonus tracks* (*Standing With You and Die Then Grow are wonderful additions to the album, and will ease some of the longing for that old Avett sound).

8 responses to “Album Review: The Carpenter”