From the stressful thrill of purchasing tickets to inevitably sitting in bumper to bumper traffic, no other music experience can quite compare to the coveted live show.  There is the build-up, the planning, and the pregaming that  leads up to the big event, during which time fans speculate on anything and everything from the potential “gems” that may be played to the probability of getting a perfect vantage point in the GA pit section.  This type of speculation tends to linger until the lights and house music come on to indicate that the show is over–that is unless you plan to try to meet the band after the show, which brings on an entirely new level of anxiety and hypothetical scenarios.

For those who are familiar with the live show experience, it is well-known that the overall experience itself depends on several factors–the band’s energy, acoustics, security staff attitude, weather (if outdoors), lighting and stage effects, etc.  While all of those factors are important, nothing quite kills the vibe of a live show more than a rude or obnoxious person in the crowd.  Whether it’s a drunk, belligerent frat boy, an eager Instagramer, an incessant texter, a tone-deaf wannabe singer, or that person who will just not shut-up, these people will successfully and often single-handedly ruin shows for both the crowd and the band, time and time again.

The debate about concert etiquette is certainly not a new one.  However, over the past decade we have moved into new territory with the advancement of technology, where every concert goer is packing a smart phone or pocket-sized camera.  With the smart phone comes endless options for distraction during a show–Facebook updates, Instagram uploads, tweets, texts, emails, concert calls, and–the worst yet–actually having a conversation with someone while standing in a crowd of people who are trying to enjoy the show.

These disruptive and distracting behaviors don’t only affect the crowd, but can translate all the way up to the stage.  If fans think that musicians are just going through the motions and not trading energy with the crowd, they have obviously forgotten one of the simplest laws of physics–The Law of Conservation of Energy.  Thanks to ancient philosophers, we know that energy is neither created nor destroyed.  Rather, it is converted, which in concert terms means that there is an ebb and flow of energy between a musician and the crowd.  If you think of it in terms of science, it makes perfect sense.

Anyone who pays attention can tell that musicians definitely adjust their energy depending on the crowd’s energy.  Take Ezra Koenig of Vampire Weekend, for example, who recently told Rolling Stone Magazine (August 15, 2013 issue) what he thinks about while on stage:

I used to believe that it was up to the band to set the tone at a show, but now, having played a thousand shows or so, I think the crowd has a bigger effect.  It’s funny.  When the crowd is really bad — when they don’t give a fuck, or you’re playing some awkward festival — you work extra hard.  And of course, when the crowd’s going crazy, it brings something out of you.

In Koenig’s case, a bad crowd may motivate him to work harder, but that is certainly not the case for others musicians.  As fans, we can’t control how a musician responds on stage, but we can modify our approach to the concert experience.  The first step is to take the focus off of yourself and put it on the collective.  Let’s look at the example of the eager Instagramer.  The temptation to capture every moment of a show is real–I’ve been there, done that, and may do it again.  While snapping a few choice photos throughout the show is acceptable, watching the entire show through the tiny, bright screen of your phone is a waste of money and annoys the people behind you.  I realize that it takes a conscious effort to fight that temptation, but if you start to think outside of yourself it is possible.  When you view the concert as an experience of the whole rather than its separate parts, that temptation will fade.

An easy way to do this is to approach a live show like you would a 90-minute Bikram yoga class, where it is seriously frowned upon to disrupt the energy of the room and the experience by serving your own needs.  You suppress the desire to leave the class because it’s hot as Hades, your down-dog is pathetic, and you have to pee.  You push through for the group and the final emotional, physical, and mental experience is that much sweeter–for everyone.

While there are several articles that boast lists of proper concert etiquette, it really just comes down to the fan’s approach.  If you jump in that pit with a self-serving attitude, you are sure to piss people off and potentially get yourself escorted out.  If you approach the show from a point of view of respect for others and fellowship, you will elevate the experience to a euphoric level.  So, at your next concert if you are doubting this approach, try channeling your inner yogi, let out a quiet ohhhhmmmm, and watch as the energy spreads to the group. 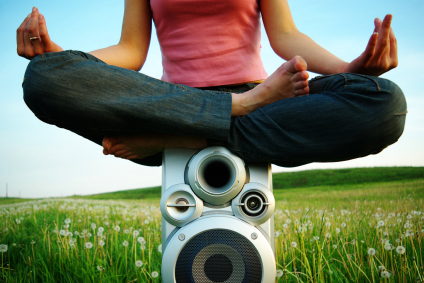 DISCLAIMER: Like my yoga practice, my concert going practice is an ongoing work in progress, so if this comes off as preachy, don’t worry, I’m preaching to myself as well! 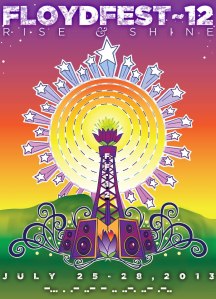 The beginning of July brings fireworks, cookouts and celebration of our nation’s independence, but the month closes out with a handful of the best music festivals of the summer season.  FloydFest is definitely one on the list that deserves attention.  Held on a quiet 80-acre plateau off of the Blue Ridge Parkway in Floyd, Virginia from July 25-28th, 2013, FloydFest has climbed the festival ranks and boasts one one of the hottest musical line-ups and schedule of events on the circuit.

FloydFest is designed for the music lover who also loves the outdoors.  Festival organizers have added events and activities that take full advantage of the beautiful, sprawling outdoor space, while keeping Mother Nature at the forefront.  The Outdoor Adventures Headquarters in the Global Village will be open daily from 10:00am-5:00pm, and offers activities including disc golf, hiking, mountain biking,  river activities, trail races, and many giveaways.

For the yogis out there, the Healing Arts Village offers a place to escape and prepare for or unwind from a fabulous day of music.  Flower of Life Yoga and DJ eXperience is a one-of-a-kind installation that will feature morning Yoga sessions with some of the world’s leading DJs to provide an exquisite soundscape to Rise & Shine to.  Once the sun goes down, the village transforms into a supernaturally lit performance area, where music will be supplied through wireless headphones.  Talk about taking the experience to a whole new level!

A host of artisans  will be on hand at the Global Village, as well as several craft beer vendors, including Starr Hill, Sierra Nevada, Foothills Brewing, Breckenridge Brewery, and Lagunitas Brewing Company.  While many festivarians will be partaking in these delicious adult beverages (responsibly, of course), don’t let that deter you from bringing your family.  Families with kids are always welcome at FloydFest.  The Children’s Universe area is designed to engage kids and get them involved in the music and outdoor activities, including Taekwondo classes, rock wall climbing, open mics and tether ball.  Plus, there’s  good news for families–there are kid ticket rates and kids under the age of 6 get in FREE when accompanied by an adult.

While all of these festival perks make FloydFest a truly unique experience, the musical line-up certainly drives it home.  In terms of music, FloydFest has more than 100 musicians on 10 different stages during the four-day extravaganza.  This year is the strongest line-up yet, with some of the best headliners and up-and-comers on the festival circuit.  The final line-up includes:

So, if you are looking for a unique festival that celebrates the best in music and outdoor adventure, FloydFest is for you.  For more information please visit www.floydfest.com.